skip to main | skip to sidebar

Some friends asked me, "Why write English haiku, instead of Indonesian or Japanese ones?"

Since the very beginning, I found it hard to write haiku in my mother tongue. Just can't tell you why, since I am not native English speaker. English is my third language, after Javanese and Indonesian. Japanese? Oh, no... never been in Japan, never speak the language.

I learn about and read Baso, Issa, Akutagawa and other Japanese haiku masters in English. I also learn from reading Rotella, Ross, Clausen, Reichgold and others in English.

However, one thing is certain; English makes it easier for me to convey my messages on two haiku basic principles; simplicity and depth. Yea, I admit that I don't stick to its traditional metrical pattern so that you won't always find 5-7-5-syllable verses in my works. I am not overvaluing my works, but in my subjective opinion, English helps me during the writing. It also helps me in translating the work of others.

Here, you may find the original works of Chandra Prijosusilo in Indonesian. She wrote it as the haiku moment touched her in Manhattan. I was not there, surely. But I tried to feel the moment by projecting the imagery to my mind, as she described the situation very briefly. My translation in italic. 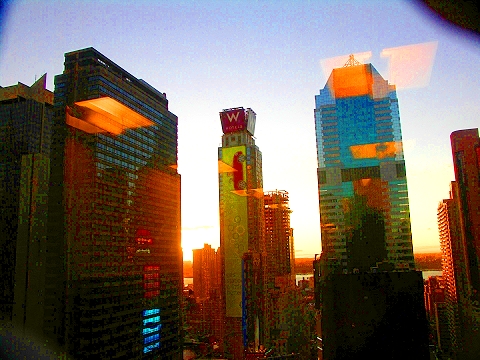 I have many friends. Some of them are old friends from my boyhood, colleagues, schoolmates and the rest are the ones who meet me in rare occasions. I would mention Chandra Prijosusilo if I were to name one that falls under the last category.

Chandra graduated from Faculty of Psychology, Gadjah Mada University. She started her study in GMU in 1987, the year when I did the same in Faculty of Economics. We shared the same building for the first two years. However, I can't recall whether I ever met her at the time being. But, after years, I met her in Puncak during the training on journalism for NGOs, supported by Transparency International-Indonesia Chapter. It was April 2008.

I didn't expect to contact her after the training. We didn't trade contact address, phone number or email coordinate. But, I was lucky since I found her on Facebook and she accepted my friend request.

Since we're connected, we share pictures and notes. Sometimes, I drop some lines on her comment box and vice versa. As I am into poem, and recently in love with haiku, I tag her on my notes on Facebook. She usually put her comment in haiku form or other poetry. And, you know what, I found it's so fun and challenging when we tried to do the conversation in poetical ways. I write haiku, and she will add hers in my comment box.

Today, she commented in haiku-form on my Facebook note (see the post right before this one). And the following are my response to hers.

(1)
love song
resonates in my heart
growls in my belly

(3)
a matter of light
sincere camaraderie
me and my shadow

(1)
runaway kids
some raindrops reside
in the rosebud

(3)
no words
just two beating hearts
love in the making 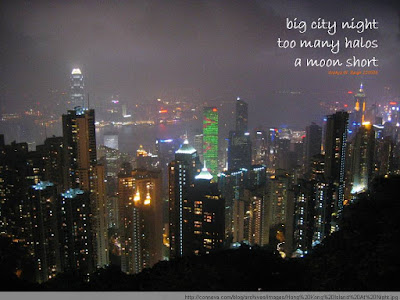 Lights and electricity have characterized big cities all over the world. In the nights, we may find colors in light bulbs, streetlights, neon signs, billboards and other outdoor medias. They all shine the light. Soo... much light, that make the night as bright as day. And, in daylight, who can see the moon?

Many big cities are also characterized by polluted air. Floating polluted cloud is often thick enough to block our view to the moon, when it is there in the sky. So, big city dwellers, ever miss the moon?

(4)
fall in love
costs you reason
to follow the heart

(5)
the good and the evil
both categories
I fall into

(1)
after the dawn
cold wind and morning haze
:birds chirping

(3)
the wind gently sweeps
treetops outside my window
:dancing light 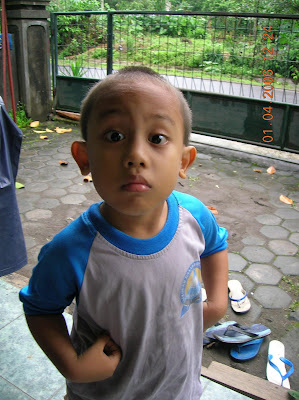 Some says that it takes nerve to be a father. Am I a brave one? Are you?

This is another haiga from me. Not really original as I already read one on Bruce Ross book. However, when the scene came across my mind, I found another angle to capture the moment. While the writer focused on the bird (s), I loved to emphasize on the circumstances.

Again, for my incompetence, I searched the image on the internet. Eureka! You can see it here. Thx, for reading and enjoying. I am indebted for the image to http://inphotos.org/wp-con
tent/uploads/2008/06/bird_on_a_misty_morning.jpg 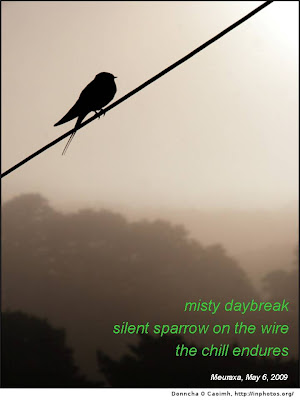 I am no visual artist. Overlaying words on images is nothing but a torture for me. So it is when I think about haiga (俳画 ?). In Japanese literary tradition, Wikipedia says, haiga is a style of Japanese painting based on the aesthetics of haikai, from which haiku poetry derives, which often accompanied such poems in a single piece. Like the poetic forms it accompanied, haiga was based on simple, yet often profound, observations of the everyday world.

Yes, I learned a bit about haiku, tanka, renga or haibun. But haiga, for me, is completely different thing as it requires an image that emphasizes the message of the poetic form conveyed by the words. The image, be it just a sketch or more sophisticated painting, is the source from which the simplicity, the depth of the poem radiates. However, I am no visual artist. The best I can do to do this haiga is doing a slight manipulation on an piece of picture. I know you don't expect too much from this. But, thx for dropping by.

Wahyu W. Basjir
Sleman, Yogyakarta, Indonesia
A father to three children, loves cooking and rock music. He writes haiku and other related forms for healing. You can reach him at wahyu.basjir@gmail.com. No email spamming, please.